New daily gas price records continue to be set throughout Southern California as Russian forces began attacking Ukraine, according to the Auto Club’s Weekend Gas Watch. The average price for self-serve regular gasoline in California is $4.73, which is a new record for the state and five cents higher than last week. The average national price is $3.54, which is two cents higher than a week ago.

“The escalation of tensions into all-out war has pushed up Brent Crude prices above $100 a barrel and if that trend continues, we could see gas prices start going up more quickly,” said Auto Club spokesman Doug Shupe. “Also, this week’s US Energy Information report indicates that West Coast gasoline supplies are at their lowest levels of 2022, which could also add to upward price pressure.”

The Weekend Gas Watch monitors the average price of gasoline. As of 9 a.m. on Feb. 24, averages are: 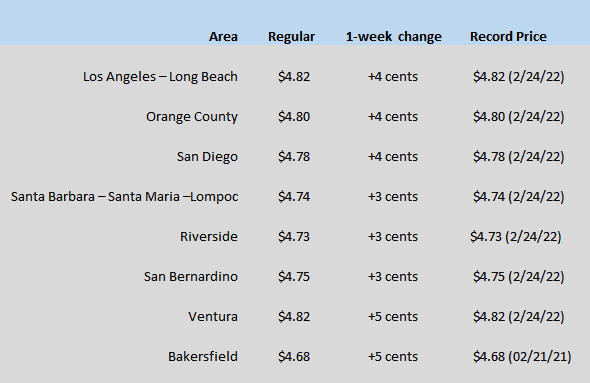