Average gas prices surged to more than $6 a gallon in Los Angeles/Long Beach and Ventura this week, with reports of two Southern California refineries having production issues as the major factor for the increases, according to the Auto Club’s Weekend Gas Watch.

“Los Angeles-area drivers are paying 70 cents more per gallon of gas than the most expensive area in Hawaii, ,” said Auto Club spokesman Doug Shupe. “In addition to issues at the Torrance refinery which started on March 6 and seems to have been resolved this week, Oil Price Information Service reports that the Valero refinery in Wilmington would delay its planned restart after maintenance until the end of this month or early next month.”

For drivers wondering how they can help cut their fuel usage, the Auto Club’s Automotive Research Center conducted a study in 2018 revealing that drivers maximize their fuel economy by keeping an average speed of 60 mph, saving anywhere from 6% to 12% compared to driving 65 mph. Those driving at speeds of 80 mph or 85 mph, on the other hand, waste up to one-third of their fuel economy compared to those driving 65 mph.

The Weekend Gas Watch monitors the average price of gasoline. As of 9 a.m. on March 24, averages are: 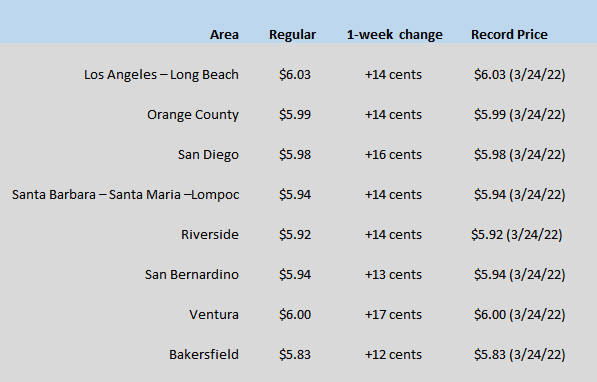