Southern Californians paid the highest gas prices in the last five years in 2019, and the fifth-highest gas prices in the last 10 years, according to the Automobile Club of Southern California's Weekend Gas Watch. Today’s retail statewide average is $3.58 a gallon for regular unleaded, which is three cents lower than last week, and the state’s average price for this year to date is $3.72.

“Cheaper oil prices and increased supply in 2016 and 2017 led to the lowest Southern California gas prices since the recession in 2009, but this year California refineries experienced increased demand and refinery issues that pushed prices up along with higher taxes,” said Auto Club spokesman Jeffrey Spring. “Gas prices have now been dropping for two straight months, although the decline could be coming to an end within the next month as refineries begin their maintenance shutdowns.” 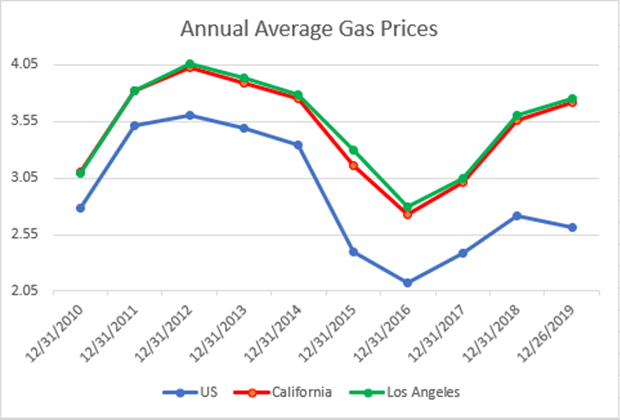 The Weekend Gas Watch monitors the average price of gasoline. As of 9 a.m. on Dec. 26, averages are: