All of Southern California is seeing the average price for regular gasoline below $3 per gallon and  most drivers are paying more than a dollar less per gallon than this time last year, according to the Automobile Club of Southern California's Weekend Gas Watch. Today’s retail statewide average is $2.84 a gallon for regular unleaded, which is eight cents less than last week and $1.17 less than last year.

“At this time last year, prices rose to over $4 per gallon because of refinery issues,” said Auto Club spokesman Jeffrey Spring. “Today prices are more than 25 percent lower because demand continues to fall, and gasoline inventories continue to increase.

The Weekend Gas Watch monitors the average price of gasoline. As of 9 a.m. on April 16, averages are: 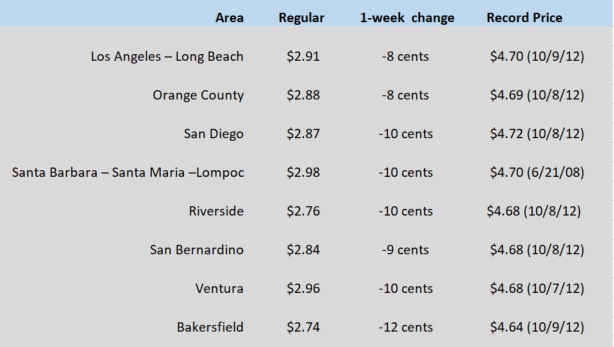